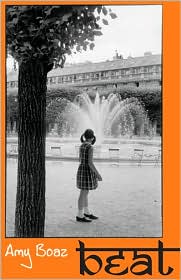 What happens when you’ve been loved grandly, then discarded, is that you combat the urge to bury yourself. To let others bury you. The shame (of loss, of failure) is debilitating, and wears away your fighting spirit—the will to defend yourself. It happened, didn’t it? He loved me, didn’t he? You’re left with a sense of unreality: it was all a dream. You no longer exist.

As Beat opens, an American mother and her 7-year-old daughter explore the Louvre. Days pass and the duo wander the streets of Paris from café to museum to bistro to park. Once it has been established that this is not a vacation for Frances and her daughter Cathy but an escape from the New York suburbs, the reader starts to wonder why this mother moves from one seedy hotel to another with one eye over her shoulder during this excursion. Through flashbacks that piece together a fiery romance, author Amy Boaz methodically reveals the reasons. Her marriage to Cathy’s father Harry had grown stale and during a party, Frances fell for an older Sanskrit poet from the Midwest named Joseph [a bearded outdoorsman—someone different from anyone she would encounter at her job as a magazine editor in Manhattan]. Through this sexual awakening, a spellbound Frances allows Joseph to take control over everything. In doing so, she endangers herself.

Frances is such a flawed character that I found her annoying at times and also sympathetic. Annoying in that she gave up so much of her own life because of this man. But then sometimes you get caught up in a moment of love or lust for a while before you realize that you are giving up more than the other person which is exactly what I think happened to Frances. And that is why I ended up being sympathetic. Frances is so in love with Joseph that she wants to impress him. She wants him to move to New York to be with her but he won’t do it. She takes most of the trips out West. She admits that she’s a terrible mother at times. She has her fallacies. She loves her daughter although one night in Paris, she leaves her alone and asleep in a dingy hotel room to get a drink in a bar across the street. Finally, Frances also comes to terms with what she has given up and that she may or may not have gotten played by this charmer Joseph. She realizes that she gave up too much and must take some of it back and with that, I could empathize.

At what point does longing become its own torture, of waiting, sitting, counting? I wait for my lover’s calls, his exquisite silhouette to appear outside the arrival gate, his leters in my mailbox daily, and his sweetest words to transport me once again to that place of joined oblivion. I wonder if I am ever truly happy knowing him: whether love is a form of willful sabotage.

Through dazzling, smart, dynamic writing, Boaz spins an enigmatic, unique story about dissatisfaction, passionate love, and the value of individual character. Boaz writes vividly and thoughtfully. Each character is painstakingly established through lyrical prose. Whether in Colorado, New Mexico, Paris, or New York, Boaz details the scenery, the smells, the people, the sounds, the colors, and every other detail of the area so that the reader feels transported to that setting. Beautifully written, Beat often read likes poetry (and Boaz turns to Beat poets quite often). As Frances learns to cope with a love affair that has soured, Beat is at turns a tortured love story and a thriller unlike any other.

This entry was posted on August 13, 2009, 13:30 and is filed under Books. You can follow any responses to this entry through RSS 2.0. Both comments and pings are currently closed.