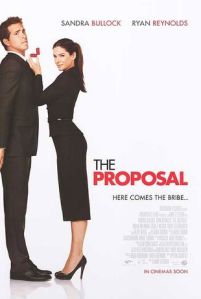 The Proposal is a packaged, sexist unromantic, unfunny, unoriginal film. Once again, a romantic comedy takes a stereotypical view of the successful woman: single and bitchy—as Margaret [Sandra Bullock] comes into the office, instant messages get sent around: “It’s here!” or “The witch is on her broom.” These ice queen roles are so predictable. When the woman thaws out due to the man’s charms, she figures out that she likes the guy right in front of her after all.

Margaret [Bullock] is an editor at a publishing company and Andrew [Ryan Reynolds] is her beleaguered assistant. Somehow she’s let her work visa expire. She’ll lose her job and be deported [all the way back to Canada] until she announces that she and Andrew are getting married. As a trade off, he wants to be an editor and wants his manuscript published. Off to Sitka, Alaska the duo go for the 90th birthday party of Andrew’s granny [scene-stealing Betty White].

Ridiculous moments: Margaret cannot swim; Andrew’s father is still mad at him for not working with the family businesses; the pair literally run into each other in the nude; Margaret admits to being a Rob Base fan [they start dueting “It Takes Two”]; and Margaret softens when she interacts with Andrew’s mother [Mary Steenburgen] and grandmother.

I like Sandra Bullock and it’s such a disappointment that she even took this role. Her last romantic comedy was seven years ago with Hugh Grant in the dismal, equally unamusing Two Weeks Notice which had a similar office-set premise. Roles that suit her much better are those in films such as 28 Days and The Lake House. It’s too late to pull off the Hepburn/Tracy thing. Zooey Deschanel and Joseph Gordon-Levitt have that vibe going for them in July’s 500 Days of Summer.

Reynolds and Bullock start off with an amusingly caustic give and take and good chemistry but it fizzles out quickly as the script quickly falters. The screenwriter threads together an implausible story with silly jokes. Director Anne Fletcher [27 Dresses] clearly does not care about engaging the audience because these characters remain two-dimensional. The Proposal is a lazy retread of every other romantic comedy you have ever seen before.

ps. stunning views of “Alaska” right? [shot mostly in and around Gloucester, Mass.]

This entry was posted on June 19, 2009, 06:12 and is filed under Film. You can follow any responses to this entry through RSS 2.0. Both comments and pings are currently closed.