When gay rights continue to be threatened today, a film about a 1970s gay rights pioneer is important to see. Unfortunately it will not reach the audiences that it needs to reach most. Here in Massachusetts, we have gay marriage. In California, where Harvey Milk fought for gay rights so ardently, gays have had their civil rights taken away and now are fighting Prop 8 (the recent vote against gay marriage). This should be merely a historical film but it cuts into today’s political climate as much now as it did then. It saddens me. I saw the film with my close friend who happens to be gay. We saw it in liberal Brookline at the Coolidge Corner theatre. During classes we took together there was an early undercurrent of “is he or isn’t he gay?” and I just don’t see why this type of discussion still exists or needs to exist today. Why does who someone chooses to have sex with really matter in the end? More importantly, why should society and the government care so much?

At 40-years-old, Harvey Milk lamented that he hadn’t done anything with his life and after looking around his neighborhood and realizing he had a chance to make a difference, he threw himself into politics. He vigilantly worked against many against many anti-gay initiatives. His effervescent personality, resiliency and perseverance (he ran for office four times) paid off when he finally became elected to the San Francisco Board of Supervisors, and the first openly gay elected politician, in 1977. Everyone seemed to like him and he developed a huge grassroots following. During his short time in office, he managed to pass a major gay rights ordinance for San Francisco. Milk and Mayor George Moscone were assassinated by disgruntled former San Francisco supervisor Dan White. 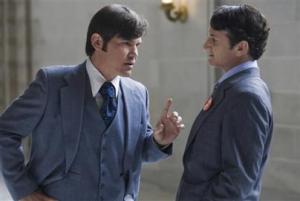 Sean Penn [The Interpreter, Mystic River] portrays Milk in a powerful, profound, commanding performance and will most likely be nominated for an Academy award. He is ebullient and convicted to the end result and wins you over from the first frame. He makes you love Milk right off. He also makes you feel like you are watching a documentary at times. He has the mannerisms and affectations down. And when he’s with his lover, played by the talented James Franco [Pineapple Express, Spider-Man 3], the sex appeal oozes. The duo has smoldering and intense chemistry. James Brolin [W, No Country for Old Men] as Dan White and Emile Hirsch [Into the Wild] as Milk’s protege Cleve Jones, are outstanding as well. First-time screenwriter Dustin Lance Black weaves a compelling script, while director Gus Van Sant [Elephant, Good Will Hunting] scores another convincing, provocative film that delves into a difficult, emotional subject.

Milk is a moving, inspirational film. The gay rights movement, starting around 1970, piggybacked on the civil rights movement, and is equally as historical. Though there are not as many big names attached to the movement or memorable speeches or seminal/blood shed moments. Being openly gay and advancing the rights of gays not only in California but throughout the country by making people realize that being gay wasn’t something that should hold them back or allow them to be discriminated against. He created legislature against such discrimination. Harvey Milk began every speech saying, “My name is Harvey Milk and I’m here to recruit you.” He had a “platform”, so to speak,” of getting people to come out to their families, friends, and co-workers. That is his legacy.

Dubbing himself the Mayor of Castro Street, Milk had charisma. He declared that it was “not just issues. This is our lives we are fighting for.” And that it was never just gay rights but human rights. Harvey Milk understood the big picture long before others did and longer before many more will.

This entry was posted on December 10, 2008, 04:59 and is filed under Film. You can follow any responses to this entry through RSS 2.0. Both comments and pings are currently closed.