This ironic, savvy political satire is set in Turaqistan, a country occupied by an American private corporation, Tamerlane, run by a former US Vice-President (Dan Aykroyd). John Cusack plays a hitman, a character not unlike that in one of my favorite Cusack films (mainly for the nostalgia of my high school class) Grosse Pointe Blank (a film he also co-wrote). His dry, sarcastic, breathy, rapid fire delivery is there as well as his dissatisfaction with his career choice. He seems to thrive on playing conflicted hitmen. In another war related film earlier this year, he wasn’t as strong as a widower whose wife died in Iraq in Grace is Gone).

Brand Hauser (Cusack) gets an assignment to kill the oil minister because his plan to build a pipeline will ruin the plans of Tamerlane, the company that controls every aspect of this country. As a cover, Hauser will run a trade fair in the Green Zone (aka Emerald City) that highlights capatilstic delights and features the marriage of pop star Yonica Babyyeah (Hilary Duff) to the son of the Emerit.
This ironic, savvy political satire is set in Turaqistan, a country occupied by an American private corporation run by a former US Vice-President (Dan Aykroyd). In this Muslim Country, America is welcomed in tongue-in-cheek manner with American style diners, a Jack in the Box restaurant and shameless advertising. The details are brilliant: the battered looking villagers are wearing crocs! The military hummers have advertisements on them, like taxi cabs. An erratic zealot dispatches Cusack to kill a leader in Turaquistan and he really does not want to be there. He meets a liberal, sexy journalist (Marissa Tomei) and tries to help the Arab pop star version of Britney Spears. 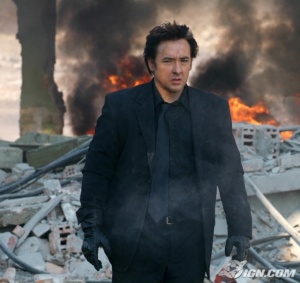 Everything gets outsourced. The spread of commercialism throughout the war is on full display. There’s money in war which I think anyone who’s ever seen a 60 Minutespiece on security or the “re-building” of Iraq knows. War Inc. possesses an absurdity but also so many layers and clear thinking about the consequences of our actions on a global and national scale. It’s obvious in its anti-war stance but in a clever, entertaining manner.

We all love John Cusack. Any Gen Xer does and he succeeds in this outrageous, provocative film. Marissa Tomei has chosen some fantastic roles of late (Before the Devil Knows You’re Dead) and I admire her for not relegating herself to the over 35-year-old mom roles. Joan Cusack plays a raving, over-the-top, eyes bulging, blabbering (saying everything we are thinking) assistant who cannot get out of this awful country fast enough.

This entry was posted on June 13, 2008, 02:23 and is filed under Film. You can follow any responses to this entry through RSS 2.0. Both comments and pings are currently closed.