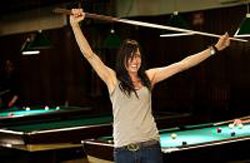 When he introduced the film at this year’s Independent Film Festival of Boston, writer/director Chris Eigeman said, “If handmade is the opposite of corporate, I hope this feels handmade.” It does. It has its charms. Eigeman starred in the Wilt Stilman trilogy: Metropolitan, Barcelona and The Last Days of Disco. He’s very good at playing the buttoned-up, upper crust preppie type. So it’s somewhat surprising that he wrote and directed a film like Turn the River. But then again not that surprising as in those films, the characters drew the interest. Turn the River is a character study. Eigeman met Famke Janssen when they starred in the indie In Treatment together. Eigeman wrote the character in Turn the River specifically for Janssen. That tells a lot about her acting talent. She’s a tall, beautiful woman, yes. If you’ve only seen her in the X-Men films, you are missing out. She’s fantastic in little films like Monument Ave. and Love and Sex. [I’d love to see a film with Janssen and Elizabeth Hurley playing sisters.] While effortlessly beautiful and cool, Janssen can delve into nearly any role with conviction. She’s fearless. And there’s no Charlize Theron-technique of hiding her beauty to play serious roles either. Those beautiful, expressive eyes carry her character through this film. She turns in a gritty, natural performance as a pool hustler mom in Turn the River.

Kailey lost her custody of her son Gulley (Jaymie Dornan) to her ex-husband about a decade ago. We’re not exactly sure why but can guess. She seems from the other side of the tracks. She plays a lot of pool, isn’t educated in the conventional way and shuffles from place to place like many a grifter. Life experience shapes her and provides her with that hard edge. Yet her heart remains open to her son. Kailey has suffered losses at a young edge when she may wasn’t even enough of an adult to realize their implications. She’s not “book smart” like her son but certainly appreciates the virtues of his private schooling. Rip Torn plays the owner of one of her regular joints. He’s the father she’s always wanted. He doesn’t ask her too many questions and he supports her and unconditionally loves her and cares for her. It’s sweet. She spends most of her time at pool houses, sizing up potential marks, storing wads of cash in the back of a pick-up truck she won in a card game. When she finally decides to make the big move with her son, she’s going to risk everything.

Turn the River is a quietly moving film. It’s not flashy but is direct and complex. It slowly unfolds to show this street savvy woman who’s so on the edge and so close to going over the top. Will she make it? The ending may leave you completely confused and even asking, “Why did that just happen?” It’s flawed, absolutely. There are holes throughout but also plenty of heart. Overall though, this is a fine little film with stellar acting from Janssen.

STEELE RECCOMENDS: SEE THIS IN THE THEATER!

This entry was posted on May 11, 2008, 21:14 and is filed under Film. You can follow any responses to this entry through RSS 2.0. Both comments and pings are currently closed.