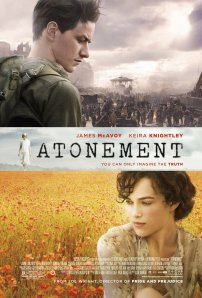 I read Ian McEwan’s lovely, wistful and contemplative novel Atonement a few months ago, mainly in preparation for this film [I did the same with The Other Boleyn Sister—though I may have found the books in another manner]. Going into this film, I anticipated waves of beauty and grace and longing. I wanted to leave the theatre with tears in my eyes. Director Joe Wright did such a brilliant job with Keira Knightley on Pride and Prejudice, so another period piece with the duo should be a serious hit [and the Golden Globes agree with seven nominations]. On reflection, this last year has been fairly weak film-wise.

So I brought my mom to the film [we see something together once a month and I feel if I don’t pick well, I am a bad entertainment critic]. She had seen the preview when we saw The Jane Austen Book Club and said, “I’d like to see that,” so I felt a bit off the hook. It turns out that Atonement is a very, very good, solid film but not outstanding. The Notebook has more romantic and memorable scenes, as we girls who recognize these sorts of things already know.

Atonement is the story of a young girl, Briony, who has a crush on an older guy, her family’s housekeeper’s son [rakishly, boyishly handsome James McAvoy]. Briony also has a vivid imagination. She pens plays for her cousins to act out and she writes fantasies about love conquering all. As it goes for any 13-year-old privileged British lass, her accomplished, Cambridge-educated sister has taken a fancy to said crush. Cecilia [Knightley] has done a remarkable job in hemming in her feelings for Robbie [McAvoy]. He also attended Cambridge and she all but ignored him as they ran in different circles, or something of the sort. The family loves Robbie and the father is paying for his education, including medical school which he plans to attend in the fall. One evening, Robbie is invited to dinner at the main house. Earlier, Briony witnesses what she believes is some sort of argument between her sister and Robbie. Later, she misinterprets something that occurs between Robbie] and older sister Cecilia [Knightley]. She accuses Robbie of a despicable crime. A destructive, irreversible aftermath follows. No one, including Briony, will ever be the same.

Fast-forward to WWII. Robbie is in service and Cecilia is a nurse. They have a few isolated moments together. Many occur only in Briony’s imagination. She too has become a nurse, but she is also a novelist [later in life to great acclaim]. Her most special and final work is a thinly veiled, autobiographical in nature, about the worst thing she has ever done: betray her sister and destroy her beloved sister’s chance for romance and happiness with a devoted, honest man. The war scenes drag and detract from film’s true potential to be an epic love story. Star-crossed lovers. Rich girl and the help. In the novel, McEwan pieces together every scene with intricate details that you find it difficult to extricate yourself from the setting. The film version needs more bridges to close the gaps. It jumps a bit too much. What works really well? The film shows crucial scenes from Briony’s and Cecilia’s viewpoints: effective, stirring visual interpretations. Atonement‘s a banquet for the eyes: rich colors, lush landscapes, long lenses to capture the important moments, meaningful glances and Knightley’s lithe bare back revealed by a glam green dress.

The final scene falls flat. I know that often great books do not translate well on the screen and Atonement needs a bit of tweaking here and there. In the end, I enjoyed Atonement, I did. I’m just a bit disappointed because I had such high expectations with the collaboration, the story, the cast. Atonement lacks true substance and character, but it’s quite lovely to gaze at like a pretty painting.I just wanted it to be dripping with regret, loss and forgiveness. Isn’t that what holiday and potential award-winning films are all about?

STEELE RECOMMENDATION: SEE IT IN THE THEATRE

This entry was posted on December 17, 2007, 15:53 and is filed under Film. You can follow any responses to this entry through RSS 2.0. Both comments and pings are currently closed.