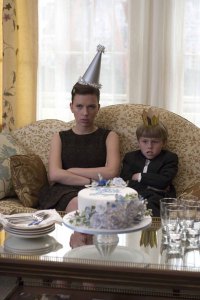 How much more silly could this film be? Based on the enjoyable, easy-to-read book, The Nanny Diaries, by Emma McLaughlin and Nicola Kraus, the film does not provide enough detail, humor or shock-factor to recommend the film over the book. While another popular “loosely based in fact” book at the time, The Devil Wears Prada, successfully unfolded upon the big screen, The Nanny Diaries does not have enough color or emotion to make the audience care. It’s all fluff and silliness.

In the film, Scarlett Johansson [Scoop, The Prestige] plays Annie, a recent college grad and New Jersey-native who walks out on her Goldman Sachs interview and instead takes a job as a nanny. She literally runs into the child, Grayer, in the park. His mother [Mrs. X—played with erect posture and a methodic detachment by the talented Laura Linney], who simply cannot be bothered running after the child, offers her a job. The nonsensical script falls flat. The relationship between the nanny and her charge is non-existent and if there is no connection between these too, why invest in an entire film called The Nanny Diaries? You never believe the attachment between the six-year-old and this nanny. He’s had so many nannies, so why would he bond with this one? Who knows? It’s certainly not made evident through their moments together. A voice-over further insults the viewer. We can see how residents of the Upper East Side act. Just show us. We do not need to hear you describe the nuances that you think we would not normally pick up. Then the film strings together the most contrite and contrived situations possible. The nanny gets exasperated by preparing food for finicky child and gives in by handing him a jar of peanut butter. Oh, and eat it right out of the jar while I keep dipping my finger in and licking it off and putting it back in. Gross. Hysterical moment where the nanny is caught with her pants down. Cute Ivy-league boy to think about. The pair “bond” over his sad, sad story of a dead mother and being sent off to boarding school. And she thought he was spoiled. Silly Annie, the nanny. Of course, the couple’s fighting and the husband’s cheating. The nanny somehow makes the mother understand it is okay to have it all and spend time with her child. It’s all cluttered in this film. The Nanny Diaries falls flat.

EXTRAS: If you care enough, there’s an interview with authors of the book.

This entry was posted on December 5, 2007, 19:25 and is filed under DVD. You can follow any responses to this entry through RSS 2.0. Both comments and pings are currently closed.