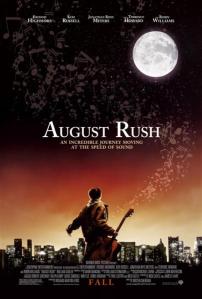 Where I’ve grown up, they try to keep me from hearing the music but when I’m alone it builds up inside me.

Once I got over the clichéd, unbelievable romantic encounter of cellist Lyla [Keri Russell] and rocker Lewis [Jonathan Rhys Myers]—the love-at-first-sight and then girl gets pregnant thing– I settled in with the complete fairytale of August Rush despite some ridiculous moments.

August Rush has all the elements one seeks in a fairytale: the princess [Lyla], the prince [Lewis], the evil guardsman [her father], the tower [her father’s protectiveness], lost love, lost dreams and the chance for reunion and redemption.

While performing in New York, Lyla hooks up with the lead singer in a band on the roof of a Manhattan apartment, during a party. Apparently, the evening is completely memorable and life changing for both parties. Lyla’s overprotective father keeps her from meeting her paramour the next day. Lewis quits his band. Lyla finds herself pregnant [no condoms in paradise]. All are haunted by the past. Lewis is obsessed with memories of Lyla and that one night so long ago. Lyla thought her baby died. She was so young her father made a choice regarding her musical career.

The boy literally hears music in everything and is, quite predictably, a child prodigy like his mother. Meanwhile in Chicago, Lyla, as her friend ironically states, is a “music teacher who doesn’t play music anymore.” In San Francisco, Lewis works in finance and is no longer in a band. Lyla’s father confesses what he did. Lyla goes on a frantic search for her son.

Suddenly both parents want to play music again. Lyla picks up her cello; Lewis contacts his band, winning them over with his Lyla-influenced love song. Lyla decides to play a concert in Central Park, while Lewis and the band book a gig at Irving Plaza in Manhattan. And he happens to be getting ready for his concert debut. In Central Park. And we all know that New York is the ultimate destination for dreams to come true.

There are many Dickensian elements in August Rush. Shades of Oliver Twist. First, August [Freddie Highmore] has been languishing at a boy’s school for the unwanted. [There is nothing wrong with him and he would have been adopted as a baby or small infant, surely. But I let that go.] He runs away to Times Square amidst the symphony of musical city sounds. The cacophony of millions of people, clashes, grinding, and motors aplenty makes the music for him. After coming under the spells of an Artful Dodger –type [in the form of a cute street musician], August meets a Fagin-type known as Wizard [Robin Williams channeling Bono’s performance and look from this summer’s Across the Universe]. Wizard gets possessive, violent and sees cash in the boy. Wizard tricks August into thinking that no one else will treat him any better. But, August wises up and escapes to a church; sneaks around and plays the organ. Of course his talents cannot be kept hidden and he soon is at Julliard being properly taught.

Highmore [Finding Neverland, Charlie and the Chocolate Factory] takes a soft spoken, serious approach which suits this type of film perfectly. The kid must be really centered, having appeared in so many fantastical films. He vacillates from dismal moments with pooled tears in his eyes to complete bright eyed excitement. Russell excels at the complete despair package: red-eyed crying, anguish and disgust. She also marvelously and expresses the yearning she has for what is lost [both physically and emotionally]. She needs to find her son and reclaim her music for her own well-being. It shows in every expression.

Russell is a superb talent as evidenced by her turn in this summer’s sweet, charming Waitress, in her small role in The Upside of Anger, as well as her lead role on television’s Felicity.

Director Kirsten Sheridan [daughter of acclaimed director Jim Sheridan] deftly creates this magical atmosphere which takes viewers on an improbable journey. The film connects a series of fortunate circumstances and chance encounters. August Rush is sweet and hopeful in its overtones; I fell for it– at least for one night.

This entry was posted on November 15, 2007, 23:43 and is filed under Film. You can follow any responses to this entry through RSS 2.0. Both comments and pings are currently closed.