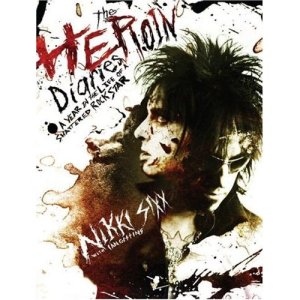 “I’ve been thinking about last Christmas Eve, when I picked up that girl in a strip club, brought her back her on my bike, took her home the next day, then had Christmas dinner by myself in McDonald’s . I haven’t made much progress I see.”

I do not know very much about Motley Crue’s music but of course I’ve seen entertainment news about Tommy Lee, Vince Neil and Nikki Sixx. When the band was really popular and Sixx had his hellish year of deep depression and dangerous addictive behavior, I was a senior in high school. At 29, Sixx was at the nadir of his career and at the same time suffered intense stress dealing with fame and good fortune and his own insecurities, depression and loneliness despite being in the midst of the circusy atmosphere of the Crue. In his journal entries, Sixx writes candidly about the way heroin makes him feel—sometimes he feels good as it is an escape, a blanket to hide beneath and a way to cover his insecurity and other times he questions his behavior and why he feels so bad. He keep his habit as hidden as possible– even keeping a special closet for all his paraphernalia and to which he could go to do drugs. How could such a junkie write [and read good books like On the Road, Animal Farm] while so drugged out? Rock and roll really is all about excess. How many girls did he have sex with over the years (some nights there were three or four!)? He couldn’t find a vein to shoot up and would shoot up in his penis. Also, to get as low as he did was pretty easy when surrounded by other users and abusers [at lesser degrees]. In the end, Sixx has similar problems to many people (depression) and the heroin was a way to isolate and numb him. He did not have the proper tools or support to get himself out of these depths of despair and destruction. To provide a more revealing aspect to The Heroin Diaries, 2006’s sober Sixx recalls his experiences and also brought in band mates, managers, publicists, other record industry people, friends, family and former girlfriends to comment on his behavior during this year. That provides unique insight because even Sixx did not realize some of the inane things he did while on heroin. The Heroin Diaries has rough spots, unbelievable moments but the desire for Sixx to share his struggles in the hopes of helping others is admirable. It also makes for an intriguing read for those who envy the rock and roll lifestyle.

“When I’m losing my mind, the only thing that can save me is heroin.”

This entry was posted on October 12, 2007, 16:56 and is filed under Books. You can follow any responses to this entry through RSS 2.0. Both comments and pings are currently closed.